For his work with children, Rev. Douma has received congratulations and awards from the White House, FBI, several governors and mayors. The Lord has worked miracles through this servant who is willing to totally follow Him. 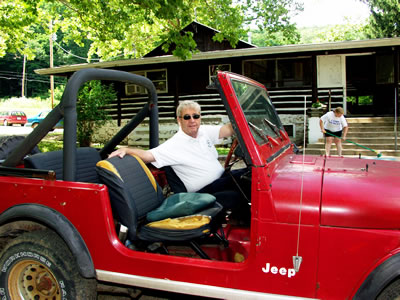 NEW! Donate a gift of $20.00 or more and receive a copy of our book as a special Thank You.

The story of how one couple brought the hope of Jesus Christ to brighten and expand the world of over 70,000 underprivileged and at-risk children, in the beautiful Arcadia Valley, Mo.

In all the years Harry sought to follow God's plan for Penuel, his longing to be intimate with Christ grew to be his ultimate goal; and, in the last weeks it was his passion. Penuel is God's camp and He used His servant, Harry, to build this refuge.

During Penuel's thirty-nine years there have been certain promises that filled us with hope. Harry rejoiced in the verse "I will never leave you or forsake you." Hebrews 13:5b. For a child who was abandoned at age two this promise from his Heavenly Father became his sure anchor.

Along with all the problems and hard work, Harry was always thrilled with the excitement of following the Master. Another favorite scripture became "Faithful is He who called you who also will do it." I Thessalonians 5:24

Always, but more in his last year, Harry wanted Penuel to continue to grow in leading children to the Lord. Our foundation became Ecclesiastics 3:14 "I know that, whatever God doeth, it shall be forever."

Penuel is God's idea…His camp…and He guarantees it forever.
WHAT A PROMISE…WHAT JOY!

In appreciation for your tax-deductible gift of $20.00 or more to the ministry, we will send you a copy of
Camp Penuel "God's Camp" by Carole Douma.

Harry was not remarkable because he was smart or gifted or wealthy or came from a unique family. Harry was remarkable because he believed God and followed Him. That "bold child" from Jersey was molded little by little into a warrior for the Lord. He was transformed. He became a servant and the most loving friend and pastor ever. He lived Christ in his relationships with others, and while praying always he could never sit still. While he was in college he started a local boys club for fun and Bible study. Harry's list of service is a long one. He pastored four churches, Port Monmouth Bible Church in New Jersey, Times Beach Bible Church outside of St. Louis Missouri and the First Baptist Church of Pilot Knob, Missouri. His final position was the founder and president of Camp Penuel and pastor of Penuel Fellowship in Ironton. The list of accomplishments is long and varied. Several books of letters of campers were printed, he wrote The Book of Revelation for the Layman and between times he led seven or more trips to the Holy Land, Greece, Turkey, Egypt, Lebanon and about seven excursions to Hawaii. Harry held many revivals including a youth conference in Recife, Brazil. The Chamber of Commerce of the Arcadia Valley awarded him a lifetime achievement honor. He was chaplain of the local district American Legion. Along with all those Harry led to the Lord, his children were his great joy. Daniel Harry lives with his wife, Kimberly and kids, Miriam, Timothy and Maleah in Colorado. Deborah Joy now heads Camp Penuel. Mike and Joy's daughter, Heather Emert Taliaferro's first job at camp was to police the area. She loved finding lots of trash. Eventually she became head cook. She is now a nurse and she and her husband, William, presented us with our first great-grandson, Liam. Crystal Ann Mace, our surprise daughter, lives with her son Carl in Farmington. Crystal was born in the summer of 1978 and Harry took her to the camp on our way home from the hospital. In her early years she spent time behind the candy counter sampling the candy bars. Finding they didn't taste good in the paper, she would put one back and try another! She worked on staff even during college and became camp director. The whole family is involved in serving the Lord and children.

During his last days, Harry spent time on the phone with friends and at the house with all his family. It was so important to Harry that the work he began here would continue after he left. We rested in the promise "that whatever God doeth, it will be forever." This past summer of 2011 we received a new pontoon boat in Harry's honor. Its name is HMS Harry H. Douma, His Master's servant. He loved boats, the water, the Arcadia Valley and his family, but most of all Harry loved the Lord.

On January 18, 2011 Harry finished his earthly work. Camp Penuel is his legacy. God is searching for people like him who are willing to follow completely. Don't be afraid, If God has called you to a work, it will be hard, but He will do it! In the 39th year of Camp Penuel, many adults have come to the Savior, and over 70,000 children have experienced God's love.

Come, be a part of God's plan here. Harry will be cheering you on! 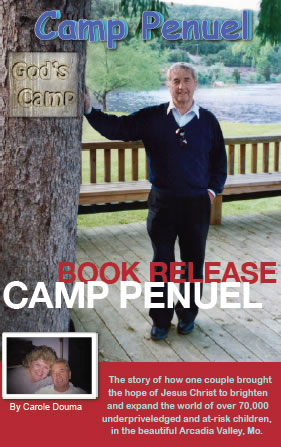